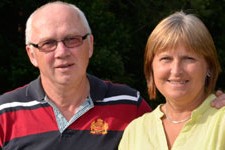 To be a sponsor at Caminul Felix is a privilege.

To monitor operations and both see and hear the results bring joy and inspiration to continue to support. Aid reaches 100%. The needs are so great and despite the fact that Romania now has a membership of the EU, it does not change the country so quickly. It’s a long way to go for the weakest man get the better, and we who have so many things really need to help.

I was privileged to travel to Oradea in 1991 and over 2 weeks to help build on Caminul Felix 1 with family and friends from my home. These two weeks touched me a lot. Part of my heart stayed in Romania and has not yet returned. After Caminul Felix became clear it was not until, for various reasons, ’96 before I signed up as a sponsor and then received a short letter with a story about a little girl who has been left alone since her only protection, the grandmother became ill and hospitalized. The card shows a shy and insecure little girl who had to move into Caminul Felix 1, I took her to my heart like a second daughter (has two biological sons and a daughter).

Each quarterly newsletter included a greeting from Gabriela as this was her name. I have drawings and greetings stored in a binder. When you now look back, it’s interesting to see how she developed. I wrote back but was not sure if the letters arrived. Communication  was a little uncertain years after the revolution, but around year 2000 it became possible to have e-mail which helped considerably. Gabriela was older now and good at English and I was glad indeed when her mail arrived. Gabriela seemed to like being at Caminul Felix 1 and was constantly in touch with his grandmother.

She was very dedicated and focused hard in school. She did study very well, even through the University of Cluj. I almost felt that it was too much for her. How could I know this? An amazing thing about Caminul Felix is that you can meet with the children, when they visit Sweden with the choir (very good, I must say) or you can go down to Romania. I have had the opportunity to do both. The relationship becomes even stronger. I have in this way also made many friends in Caminul Felix. In particular, parental couple in the house, Ovi and Loredana, where Gabriela grew up. The best trip I made in September 2010. I received an invitation to the wedding and the invitation followed by a question if I could bring Gabriela to the altar at the wedding ceremony. What do you answer that? Of course, me and my wife were there and I had the honorable mission to bring Gabriela to her Razvan. An unforgettable experience.Now she is grown, married and working at Sunflower Design. We keep in touch via email and will surely meet again soon. To be involved and help give so much back and the possibility of this is for everyone.

Be part of something great

Are you interested to join us, but you're not sure where to start? We have everything ready. Learn more about volunteering at Felix Villages, expectations, future prospects, benefits and culture.